Today’s word and common mantra across world is Growth & Development.

Every modern human being on Earth, wakes up to a day seeking and working hard to achieve his/her aspirations consistently.

This was, been doing so at a cost of individual mental and physical health by disconnecting from nature.

In good olden days, one might remember seeing every house in a street having a plantation outside or in-house garden with full of indoor Air-Purifier and Flower plants and among others.

Which makes every occupant in the house expose to nature, and get mental and well-being benefits from plants all day all long, period.

Now in pursuit of development in all aspects of life that we see, outside of our house spaces that once we allotted for plants now took over as parking lots for owned vehicles.

And also with more people moving to cities looking for greener pastures, this has put lot of pressure on optimal usage of our house spaces, leaving occupants to give minimal or not much preference for in-house gardens which would have helped to combat in reducing air pollution.

But you shouldn’t be worry about it no more..!!!

Following are the list of Top 5 low-maintenance Indoor or House Plants takes less space, which you should have in your home to bring positive zen and to generate rejuvenative atmosphere 24/7. Aloe known for healing and curing skin burns, was rated as one among of the Top Indoor Plants that one should have in home by NASA, because of its property to remove air toxin Formaldehyde and ability to release more amounts of oxygen.

Aloe vera is a succulent and also known as ‘crocodile tongue’ in Indonesia because of its thick, long and sharp leaves projecting out from center base.

The Indoor plants grows in best with lots of sun and less water, and placing it in Bedroom will have tremendous health benefits to the occupants because of its property to produce high and rich oxygen. 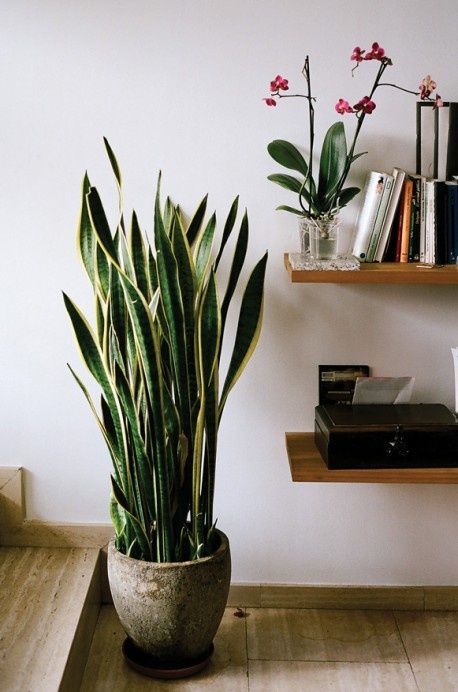 It is one among top 5 Houseplants recommended by NASA space research agency that purifies indoor air.

And helps in removing air-toxins formaldehyde and nitrogen oxide produced by fuel-burning appliances installed in home.

It demands less space, and a low-maintenance air-purifier plant that takes less light and water to survive.

Snake Plant which also known as mother-in law tongue plant, has great health benefits and recommended to place the plant in Bed Room and other living spaces. Spider Plant, which is in top NASA list of the best air-purifying plants.

This decorative houseplant also known as airplane plant, was recommended to place in Living spaces in house.

Spider Plant requires less direct sunlight and needs water to be poured two to three times in a day. Golden Pothos is popular and most recommended House Plant that one should have in their house.

It adds as decoration and enhance living spaces environment as a hanging plant.

In its research published in 2009, by NASA, the American space research agency said, Golden Pothos can able to clear air-pollutant formaldehyde.

The plant can grow with less sunlight and at cooler temperatures, and requires less water. Lucky Bamboo Plant is most liked and admired plant in India and Asian countries.

For its belief that, it will bring good luck and fortunes by having these plant in home.

This small houseplant occupies less space and bundled together with ribbon, is a good air-purifer Indoor plant and requires less-maintenance.

These are the top 5 best Indoor or Houseplants that you should have in your home or work space environment, scientifically proven to provide health, mental benefits and also boosts productivity of an individual.

So, if you have know any other Indoor Plant that you think provide value-benefit of in physical, mental and spiritual. Plz share in comments.

Where To Keep Lucky Bamboo In Home & Office With 5 Tips

Luck, might be just a four letter word, but it puts every person with age and gender differences alike... read more

Lucky bamboo has been a staple in homes and Feng Shui for years. It’s a symbol of luck and prosperity making it... read more

Houseplants are a tried and true way to bring vibrant color to your home and to bring nature inside.... read more

Zamioculcas zamiifolia (more commonly known as the ZZ plant) is one of the most hardy plants around and perfect for... read more

Aloe there! Get it? Aloe vera, commonly referred to as the savior of sunburnt skin, has a plethora of classifications... read more

Think of Nature, Think of Us...

We are currently unavailable due to some personal emergency. The store operations would start from 01-SEP-2021 Dismiss